I received my earthing large body band yesterday. I was able to test it out with the continuity tester and discovered that it grounds me. Or at least, according to the continuity tester it does. I tried the body band out on my arms and legs and discovered it was a little too large for my skinny arms. It works alright on my legs, but I think I was hoping that it would be large enough to strap around my chest. No dice.

I strapped the body band around my head and tested it. I also placed the universal mat under my feet and began grounding right before falling asleep. I stayed in bed for about 8 hours and with two products touching me, I should have been grounded the whole night. I know that sometimes the universal mat gets pushed aside when I roll over at night.

Now, as I mentioned in yesterday’s blog post, I had been earthing outside in the wild for a few weeks. I had also been using my universal mat whenever I could. However, I hadn’t tested for continuity to ensure that the product was working until now.

Here are some things that I noticed when I woke up:

That’s about it. I wish I could report more, but it is early in this Earthing experiment.

I am hoping to heal the following conditions with earthing. I have tried diet and exercise, but always seem to fall short. I’m hoping that this 90-day Earthing experiment improves some of these conditions.

Earthing stabilizes the internal bioelectrical system which can impact the immune system and the electrical activity in the brain. While there are few studies on Earthing, it has been shown to reduce pain and inflammation. A pilot study showed that earthing improved the electrodynamics of red blood cells and reduced blood viscosity, which is a key parameter in diabetes and cardiovascular disease. The thinner blood due to earthing allows for more oxygen delivery to the tissues and reduces inflammation.

I’m hoping that the reduction in inflammation will enable my hair regrowth to begin. This has been a ten-year search for me to find something that will help with the autoimmune condition, alopecia Universalis. Although, I don’t expect to see any new hair regrowth for at least a month. If I have new hair regrowth before then, it may have been due to the dietary changes that I made five months ago.

As much as I hate to post a photo of me without my wig, I’m going to prove that I don’t actually have any hair. This is the before photo. I will post follow-up photos and progress photos during this trial. Hopefully, I will start to see some hair regrowth and be able to report that this Earthing device really works! 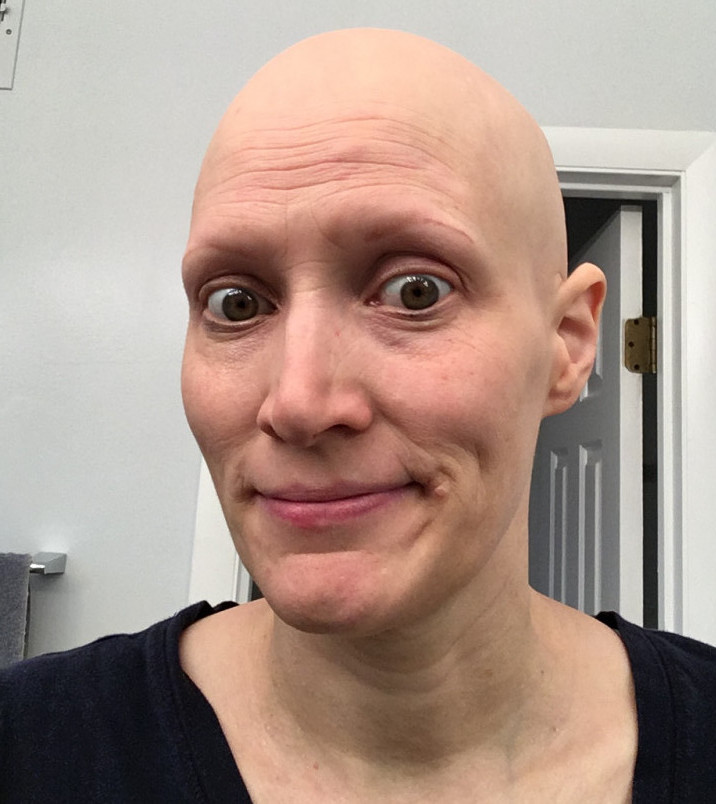