After much debating and reading about different diets, I decided to go back to the Paleo-Ketogenic diet. I had been considering doing the GAPS diet for the month of March, but in the end the paleo-ketogenic diet was so similar to the GAPS introduction and so much less complicated.

My fear with the GAPS diet is that I won’t wait long enough for healing to be completed before moving on to the next stage. Then my only indication that it isn’t working is a transient seizure, which is a horrible thing. In reviewing the paleo-ketogenic diet materials, I think I have identified why it didn’t work for me. I think I had not been eating enough offal. I had been consuming the required pound of liver per week, but I had been taking bone marrow capsules instead of bone marrow. When I tried it the first few times, I hated it. It was also difficult to obtain and expensive. I figured that bone broth and some dehydrated capsules would work. It may just be that I didn’t spend enough time to reap the rewards of the diet.

After completing the Whole30 diet and having a seizure on day 30 right after I told my friends that I didn’t have any, I went and got my blood tested. I was a bit shocked. My vitamin D level had dropped despite taking a bit more cod liver oil. My TSH had also gone up.

So, I evaluated what I had been eating. While I had avoided dairy and grains, I had been enjoying potatoes and apples. I hadn’t been worried about being in ketosis. While my fruit consumption was only at 1 per day, combined with a weekly serving of potatoes could have increased my need for magnesium. That in turn would throw off my calcium channels and cause instability in the brain.

How do I feel on the Paleo Ketogenic Diet this time?

Today is March 5, so I have been doing the Paleo-Ketogenic diet for 5 days straight. I’m not testing my blood levels just yet or eliminating eggs like you are supposed to in the initial phases. I’m easing my way into this restrictive, yet delicious, eating pattern.

I have noticed that my bowel movements are smaller, more comfortable, and I don’t need nearly as much toilet paper. I am noticing that I have more energy and need less sleep. This could be the excitement of starting something new or the slightly longer days as we head into spring. Time will tell.

One negative symptom that I have noticed is that I have a boil in an uncomfortable place. It popped up last night. I’m hoping that it will go away quickly. It is not something that I normally get. I have read about people like Kelly Hogan doing the carnivore diet and having symptoms of boils go away. Not sure why it popped up just as I started the diet. Another negative symptom that I feel is weak when I’m hungry. Almost shaky like my sister describes her feeling of being “low.”

What am I eating?

Since I had done this diet before, I knew which foods were allowed. I have been having ground beef and eggs for breakfast. Luckily, my brother gifted me with some pastured eggs for my birthday and I have been eating high-quality eggs.

I have been cutting up some fatback to increase my fat intake. It is so wonderful. It is just like bacon, but without the chemical seasonings. I have found a way to love eating fat.

Finally, I have been eating beef liver each morning. This is more of a habit that I got into because it is supposed to be so very healthy for you. Due to the fact that my vitamin D levels were low after doing this diet last fall, I decided to add in some cod liver oil and maybe a weekly dose of salmon or sardines. 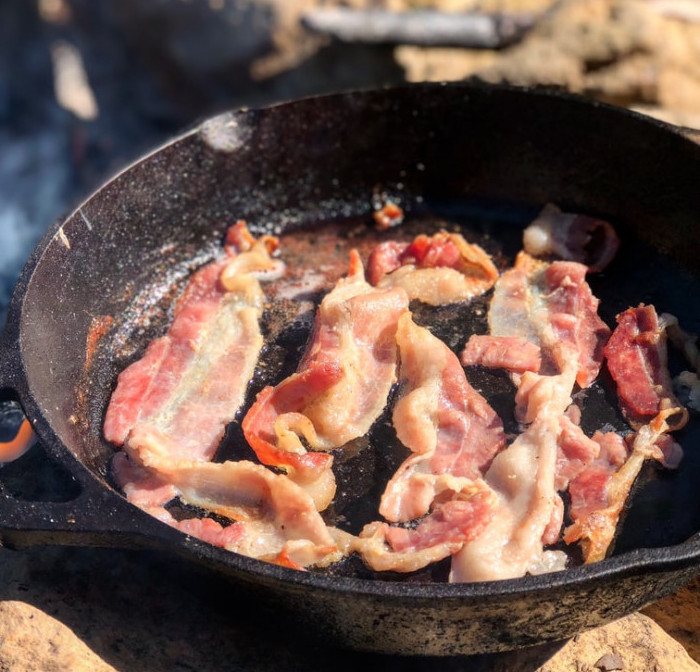 I’m going to increase my dosage of bone marrow. I found a great source for it. I think I can eat the required 250 grams per week. I’ve also discovered that I can stomach it when I mix it in with my ground beef.

I may increase my intake of offal by adding some cod livers each week. This will ensure that I’m getting adequate vitamin D and hopefully raising my levels. I don’t want to take synthetic vitamins because they can just create another imbalance with the magnesium or calcium.

Finally, it is my goal to get the nitrates and nitrites out of my diet. Oh, but I do love bacon. My plan is to get the uncured stuff from the local farmer on March 27. I’ll taper down how much I eat until then.