Water is the basis of all life and that includes your body. Your muscles that move your body are 75% water; your blood that transport nutrients is 82% water; your lungs that provide your oxygen are 90% water; your brain that is the control center of your body is 76% water; even your bones are 25% water. A 12-ounce can of soda contains around 150 calories and up to 40 grams of sugar. Drinking one a day means ingesting more than 130,000 extra calories a year, or 15 pounds of added fat ! Many people hail the benefits of drinking water to lose weight, but is this just a myth or is there some substance to the theory? Does adding a lemon to the water help you to lose the weight?

As someone who only drinks water and doesn’t have a ton of weight to lose, I had to rely on my experience with the personal training clients and friends who actually took my advice to switch to water drinking only. One of my friends, who was over 300 pounds at one point actually did follow my advice to drink half of his body weight in ounces. What happened? Months later, he told me that he had lost fifty pounds! He hadn’t started exercising or anything else, he just increased his water intake because I told him to do so. So, I don’t believe that drinking water to lose weight is a myth. 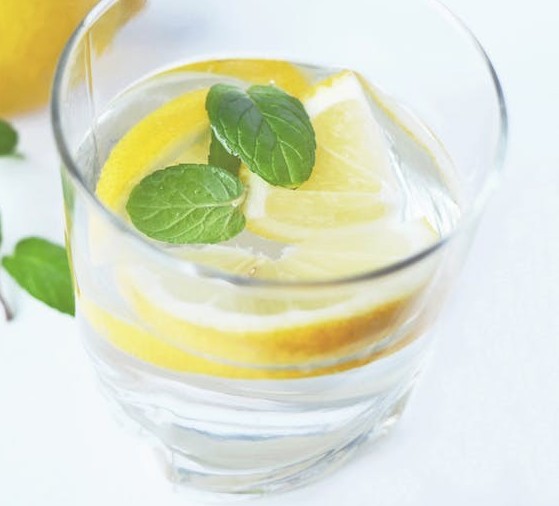 Replacing Other Beverages With Water

Water has no calories, which other beverages tend to have, therefore leading drinks like soda and juice to increase your daily caloric load. Not only are these beverages higher in calories, but they are also higher in carbohydrates. When your body has too many carbohydrates, it uses them as fuel and stores the excess as fat. Your body can not do that with water, since it has no calories.

Take soda, for example, one twelve ounce soda has about 150 calories and approximately forty grams of sugar! By drinking one can of soda per day, it means that you are drinking an average of 130,000 additional calories each year. That can be turned into fifteen pounds of fat! By replacing your daily can of soda, you will avoid adding those extra inches to your waistline.

Drinking Lemon Water Prior to a Meal

The evidence on drinking water prior to a meal is scant, but there is a study published in the journal, Obesity, that may support this theory. Researchers randomly divided overweight older men and women into two separate groups. Both groups were put on a hypocalorie diet, meaning they were consuming fewer calories than their energy expenditure. However, one group was told to increase how much water they drank. Those in the group on a diet and increasing water consumption had to drink 500 ml of water thirty minutes before each of their three large meals. After twelve weeks, it was determined that the group who had drank water prior to their meals had on average lost an additional four pounds (2kg) compared to those who were only on the hypocalorie diet.

Many people claim that lemon water helps to improve your digestion and have noticed that bloating goes down when you drink lemon water. Improved digestion can help aid in weight loss. As your body becomes more efficient with its digestive abilities, it is able to eliminate toxins instead of holding on to them. This could assist you in your weight loss goals.

Lemon juice’s atomic structure is very similar to the body’s digestive juices in the stomach. It is theorized that it tricks the liver into producing bile. This helps keep the food moving through your body and its gastrointestinal tract. This can relieve indigestion and ease and upset stomach.

Lemon juice’s acids can also encourage your body to digest food more slowly. This allows for drawn-out absorption and means insulin levels remain steady and you get more nutrients out of the foods you consume. Better nutrient absorption reduces bloating. Lemon water benefits the enzyme functions in your body, stimulating the liver and flushing out toxins. Because it’s a mild diuretic, you might find yourself using the bathroom more often, helping the urinary tract get rid of any unwanted elements. With these bodily systems working better, it is likely that your body will be able to eliminate toxins and waste better.

While the lemon in the water may not increase your metabolism, it has been shown that drinking water boosts your metabolism. According to a study which was published in “Journal of Clinical Endocrinology and Metabolism” in 2003, it was discovered that the metabolic rate of adults increased 30 percent after they drank two glasses of water. This effect lasted between 10 and 40 minutes following their water consumption. Therefore, scientists conclude that drinking 8 glasses of water a day can increase your body’s ability to burn calories. Drinking lemon water, which involves just lemon juice and water alone, would add to your daily consumption of water. Increasing your metabolism, or your body’s ability to burn calories will help you to lose weight. This is just one way to do it.

21 thoughts on “Drinking Lemon Water to Lose Weight – Is it a myth?”