The Buteyko breathing technique was a method of breath retraining that was created by Konstatin Buteyko in Russia. He noticed that his patients who were nearing death all have very shallow breathing and many of them were breathing in and out of their mouth. He drew a correlation between breathing and health.[easyazon_image align=”right” cart=”n” height=”500″ identifier=”1537126601″ locale=”US” src=”https://images-na.ssl-images-amazon.com/images/I/5153PMCk0PL.jpg” tag=”mcurle08-20″ width=”333″]

While I don’t support the assumption that all health issues are due to improper breathing techniques, there is a strong correlation between illness and incorrect breathing. I have noticed it myself as I worked in Special Education in the public schools. Students who were in gifted classes often were naturally breathing through their nose. The majority of them had better posture than the other students in the building. The students who were in the intellectually disabled classrooms were often slumped over and breathing through their mouths.

The Buteyko Breathing method is an array of simple techniques which offer a simple, time tested and natural cure for a variety of breathing problems and health issues.

Bronchospasm, or a sudden muscular constriction in the bronchioles’ wall, is caused by insufficient CO2 levels in the lungs. The Buteyko breathing method helps a patient to normalize this low CO2 level quickly. Once the levels are normalized, the walls of the bronchioles relax. The airways open up when they are relaxed and the patient can then breathe again.

This technique is used to counter chronic hyperventilation, which you may not even realize that you have. It focuses on learning easy and relaxed nasal, diaphragmatic breathing. When a person is suffering from an asthma attack or chronic illness, they often have poor breathing mechanics and tend to overbreathe, or breathe too shallowly and quickly. This actually reduces the carbon dioxide in the body.

As you can see from the table from Normalbreathing.com, there is a correlation between people who have an illness and the amount of air they are breathing. 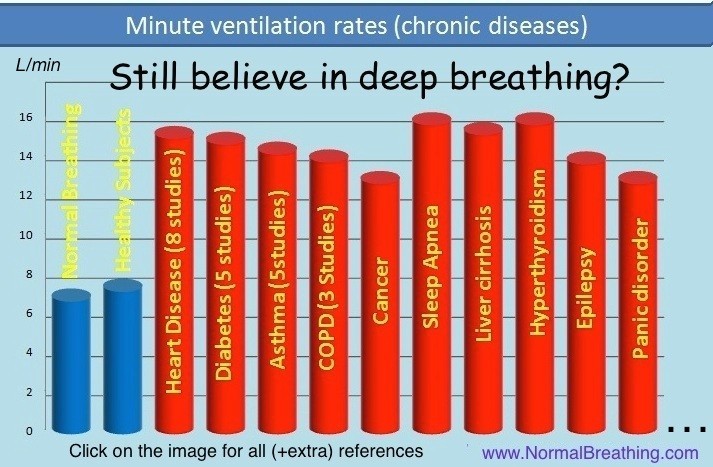 Limitations of the Buteyko Breathing Method

The Buteyko breathing method is not without its drawbacks. In order to learn this method, you need to devote about half an hour to practicing the breathing exercises per day. You also should be dedicating an hour or more to physical exercise in order to obtain optimal health. For some people with a busy schedule, they may prefer medical intervention and popping a pill to the lifestyle changes that Buteyko Breathing requires.

Buteyko breathing exercises can not overcome a very poor diet. If you are feeding your body poorly, it will need to utilize extra oxygen to digest that food. You may discover that after eating junk food, your breathing returns to a faster unhealthy pattern.

Some people following a zero carbohydrate way of eating have reported that their breath control has gone up to about 3 minutes on that way of eating. These were people who weren’t even practicing the Buteyko breathing method. (Most people who are suffering from a chronic condition can barely hold their breath for 20 seconds without some stress.) This is due to the fact that they aren’t constantly using energy and oxygen to digest their food. Most people who are following a zero carbohydrate way of eating are in a state of ketosis and eat only once or twice per day. This enables the body to take a break from digestion and focus on healing other parts of the body.

A ketogenic diet can help to reduce inflammation in the body, which contributes to better overall health. This in turn will have an impact on your ability to slow down your breathing and ensure proper breathing techniques.

If you truly want to improve your health and have had limited success with diet or want to get to the next level in fitness, you should check out the Buteyko Breathing method. You can learn it from books, online videos or through a certified Buteyko breathing practitioner.

My own experience with Buteyko breathing has been very positive. I eliminated my asthma and learned how to control my seizure threshold with this method. As my breathing improved, I noticed that I had a lot of energy, my skin felt great and my focus was improving.

One of the books that I recommend reading to learn more about the Buteyko Breathing Method, is Patrick McKeown’s [easyazon_link identifier=”0954599616″ locale=”US” tag=”mcurle08-20″ cart=”n”]Close Your Mouth[/easyazon_link]. He discusses how important nasal breathing is for not only the gas exchange, but also proper dental formation. [easyazon_image align=”left” cart=”n” height=”164″ identifier=”0954599691″ locale=”US” src=”https://images-na.ssl-images-amazon.com/images/I/21LpZUneo3L.jpg” tag=”mcurle08-20″ width=”116″]

7 thoughts on “Buteyko Breathing Benefits on Your Health”