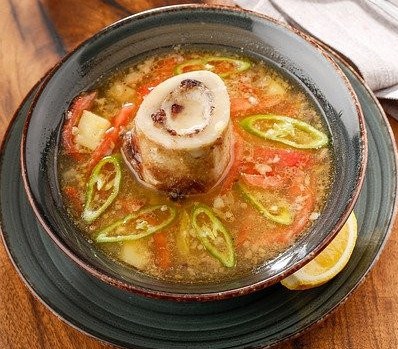 After a month on the paleo ketogenic diet, I hadn’t made much headway in correcting my alopecia. Since it is April, the pollen is out and my seasonal allergies have hit. I must still have a leaky gut because I’m suffering from allergies. I also have noticed that my tummy isn’t always comfortable. I am often bloated and gassy. Not so extreme that it is painful, but I’m beginning to wonder if the extra gas created in my intestines contributes to the gut permeability by stretching out the intestines.

I read that fatty meat can cause gas. This was surprising to me, but it explained how I could go on the paleo ketogenic diet without any fibrous foods and still have gas. It may or may not have been due to my hormone fluctuations. Apparently estrogen can cause gas too.

I’ve decided on a slight change to my paleo ketogenic diet. I’m going to make the GAPS intro soups and eat those for a few days. The macronutrients will still be ketogenic, but soups can be a bit easier to assimilate.

My first step in starting the Intro diet will be to make a big pot of meat stock. Luckily, I have tons of bones in my freezer. I will add boiled hamburger, carrots, onions, and celery to the meat stock for flavoring. Dr. Natasha Campbell-McBride recommends eating meat stock for breakfast, lunch, and dinner on the Intro diet. I’ll aim for two to three times a day.

The Intro diet is tough. I know that I can get through it. But I am going to set the goal of getting through five days of the GAPS Intro diet. That seems reasonable and I think I have enough food to get by until the weekend when I go grocery shopping.

I’m hoping that in those five days, my gut discomfort will settle down. My allergy symptoms will decrease, and I’ll start feeling more like myself.

The foods that I will be eating on the GAPS intro will be:

The emphasis on the Intro diet will be the beef soup. I know that Dr. Natasha Campbell-McBride recommends boiled meats on the Intro diet as well. I will probably end up pan frying the bacon and fish. I don’t know how important the cooking method is for the Intro diet. I’m not char-broiling or creating a charcoal crust on my meats by smoking them. I think that is good. I also don’t tend to cook them very long anyway.

I will be monitoring my symptoms on a daily basis. While I don’t expect major improvements in five days, I’m hoping for at least one of my symptoms to subside a bit. I will rate my pain or discomfort on a scale of one to ten. Hopefully by keeping this record, I can determine whether these dietary interventions are making any sort of difference.